In the land of Lansera in a fantasy other world, three heroes must not only face but accept their destinies, despite their passions and dreams to do other stuff, in order to save their country from invisible, people-eating insects. The crown prince Janto and his fiancée Serra must learn to work with Verpiri. Vespiri is a noblewoman from the breakaway province of Medua, a society devoted to the absolute rejection of morality and compassion. And Vespiri has murdered Serra’s brother. 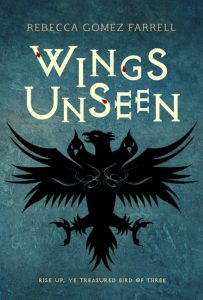 This isn’t my usual genre on many levels. Apparently Wings Unseen is YA. It’s romantic in style, with a “cozy” flavor, as in a gentle English murder mystery (indeed, it starts with a rather cozy homicide). I read this anyway because I had beenintrigued with Farrell’s short stories. I was more than impressed.

A clashing of tones is essential to this novel’s bite and beauty. After said cozy murder, with its killing-is-cute vibe, in chapter two we see people grieving for that man … ah, such a slaying has gravity and consequences.

It’s always tricky getting the world-building across in a second-world fantasy that isn’t of epic length. In Wings Unseen, I had trouble remembering the male-lead’s guy-friends and the place names. But because I never caught inconsistencies, I got convinced the author had her world down, even if she didn’t share all the excess details. So rather than page back and try to get everything straight I just enjoyed the story.

I didn’t find myself clawing to turn the page, but I never tired or struggled to finish the chapter. Once it hit a faster pace, by page fifty, I flowed into some continuous cozy reading hours.

Two strong themes in this novel are rarely to my liking: (1) an emphatic good and evil binary, and (2) prophecy or destiny as a plot driver. Yet while I occasionally thought “Oh that again,” Farrell succeeded in turning both of these potential weaknesses into strengths.

(1) Good/Evil: The back cover suggests that the two “different” nations will see beyond their differences. Instead, the bad country is utterly bad: women and the poor are property, murder is public policy. In the good country everyone strives to act from their better self; they’re all so nice that Vespiri proclaims, “I did not think Lanserim need fear a thief. You are all too noble and busy singing about sunshine …”

However, within that framework, Medua is a compassionate look at evil in both its banality and tragedy. We see inside the mind of an obedient functionary who thinks he’s beating the system, and is doomed by his lack of vision. Vespiri and her father have real love for each other that fails them in this heartless culture.

Likewise, Lansera is a means to ask, what is good? It’s a fantasy kingdom through and through, with a king in his palace, wizard-priests, and magic beasts. How can such medievalism be good? Because, silly reader, utopia is in our hearts.

(2) Prophecy is like time travel for me: it’s a threat to a linear story in which decisions matter. I don’t think Farrell quite managed to create a reality or illusion of choice; I didn’t totally feel why characters followed their destinies against enticing alternatives, even defying their hearts to do so. But that was more than made up for by their vivid emotional struggles coping with fate, both as the circumstances we’re given AND magical destiny.

Similarly, as many reviewers here say, Vespiri’s change seems too sudden. But again, the emotion of her contradictions came across perfectly. And believably: megalomania and low-self-esteem in one person is so many people, including me.

And let me add (3): the romantic style and tone set me up for surprise when Farrell turned fairy-tale romance on its head.