My friend and colleague Margaret Killjoy has published a new novel/novella (It’s novella length in it’s own printed volume, so how about we call it a “short novel?”) The Lamb Will Slaughter the Lion. 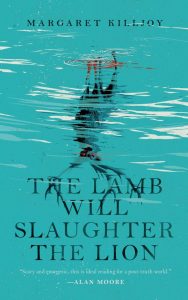 kes to Freedom, Iowa, a ghost town settled by anarchy-punks. She’s searching for clues about her best friend’s mysterious suicide, and what Freedom might have to do with it. This community has all the pieces of a good idea but something is wrong—in the air, in the animals. Turns out their murderous demon has gone off-leash and rogue. And there’s a bigger and more dangerous problem: the usual squatter dysfunction and folly.

While Margaret Killjoy’s first novel, A Country of Ghosts, came out on her own label, this one is published by Tor, a leading sci-fi and fantasy publisher. Through speculative fiction, Margaret has found a way to bring her anarchist culture and ideas to a broad audience. Fortunately, she has a real talent for telling the punk-traveler experience.

Fortunately, because so much written about the life is terrible. There’s so many bad zines, Kerouac-ism, and Evasion. All of this horror pales before what outsiders and poseurs write about us. Instead, Margaret Killjoy gets it right. She shows us as flawed and unpredictable, but beautiful and resourceful. This story is neither Lord of the Flies nor News From Nowhere. It’s about people who aren’t cut out for normal life living the only way they can. How amidst the ugliness and danger, that way of life is still worthwhile.

All the details are authentic; even when I disagree with her traveling and self-defense advice, it’s still real and doesn’t make me gag. One thing I find tiresome about urban fantasy is the moment the normal characters find out magic, vampires, ghosts, etc. are real—it’s never convincing. But in this skilled portrayal of a culture where anything can happen, Danielle’s acceptance of the demon’s existence goes down flawlessly.

And Uleksi is an outstanding demon. He’s mysterious like Moby Dick, an archetypical symbol of something or other, but he’s also more than that. Killjoy gets what it means to be intelligent without being human. Uleksi’s actions make consistent sense, but his idea of what to do is alien to us. Uleksi seeks out those who have violated others, but that’s because it’s his nature, not morals.

Uleksi fits in well with the theme of justice in anarchist communities and societies, which was also a major theme of A Country of Ghosts. Outside the system just like within, no one quite knows the answers. Killjoy’s anarchist characters know they’re merely doing the best they can. They’re not amoral or dogmatic; they’re sincere, but just because justice is anarchist doesn’t make it pretty.

To be vulnerable, Danielle’s lover reveals her weakness: “I fucking love trashy romance. The straighter the better. The worse the politics the better. I’ll just eat that shit up.” If this isn’t you, if you want a starkly unpredictable novel, that ignores gender conventions, with solid ambivalent politics, read The Lamb Will Slaughter the Lion.