At the local Fogcon, I met L.S. Johnson, who I briefly worked with on my Online critique group, the first such person I’ve met face-to-face. She provided with her recently published collection of stories, Vacui Magia. I read it, and I suggest you do too.

The back cover blurb starts, “Where does magic live? At the intersection where myth meets madness?” Pretentious sounding, perhaps, with a lot of m’s. But Johnson’s stories live up to this promise with triumph.

First the myth. I’m reminded of the role of grace in the dark fiction of Flannery O’Connor. In Catholic doctrine you need this grace stuff to get to Heaven, but it is also understood to be something that defies human logic, and to which truth matters much more than sentiment. “All human nature vigorously resists grace because grace changes us and the change is painful,” O’Connor is often quoted.

In L.S. Johnson’s stories, the supernatural is bloodthirsty, angry and callous. But like a heathen or superstitious equivalent to O’Connor’s grace, it 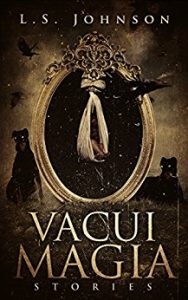 ’s integrity is irresistible. It adheres to a cosmic fairness we may never like—even at our best, our prejudices revolt against its justice. It holds the spark of true meaning and we eschew at our peril.

Second is the madness. The men in these stories aren’t particularly evil; Johnson is too nuanced for that. But the men rule the world wherever the story is set, usually modern America or Eighteenth-Century France. They usually bring misery to the women heroes, and life is a pressure cooker. Vacui Magia is not only the cultural feminist, it’s the archtypical feminine: desires run deep, the rage gets to blinding, and a hunger of the soul rips loose to combine with myth.

The combination is magic. The hero wins true agency, at the price of not knowing what the heck she is doing. The inevitable results are ruin and growth, or the Tarot reader’s euphemism, change. I hope I didn’t give away any endings.

The stories vary in accessibility. It’s fortunate the book starts with “Little Men With Knives,” which I and all other reviewers easily understand and adore. When reading the stories I got disoriented with, I recalled the stories that had been clear to me, and trusted that L.S. Johnson made sense even though I didn’t get it yet. I’d say I was rewarded each time.

While reading “The Pursuit of the Whole is Called Love,” I’d always refer back to the title and the story would make sense again. I suspect the shortest stories, “Germinant” and “This is How You Lose Yourself,” would be poems in another era. In this world, look for sense in them as you would in a poem. The title track is also like a prose-poem, but it kicks butt without a hitch.

The three stories I haven’t mentioned (out of eight) are simply great tales.

Don’t know where else to get it offhand: